He has also supplied some commentary based on his impressions while entering the games:

Round 1
My nominee for best game of the first round is Phil Le Dorze's French versus Larry Samson. The upsets were kind of horrible to contemplate, and then there was Theo's game versus Damola or Derek's game with Francis, the upsets that didn't happen.

Round 2
Some interesting games--I liked Remillard's win and Czarny's, but I'd have to give the "best game of the rouond" prize to Ma-Baron, with a tactical sequence that might have been the finest of the event.

Round 3
Trueman-A. Wasserman didn't report a score for the round. Pivotal games among the leaders, but my vote for best game of the round would go to Baron-Samson, the sort of protracted game of manoeuvre in both middlegame and endgame that is very unusual in Class player games and that does them both a lot of credit.

Round 4
It's a pity we don't have the last half of Ma-Gannon to ponder--Keith didn't hand in the game score. But I think the best game of the round was Wolchock-Campbell. A summing-up after the third round might note that Remillard, Avena, and Le Dorze were all having a good tournament at that point and that, surprisingly, the crew of 1700-rated spoilers--Green, Einarsson, Wasserman, and Wolchock--were on the point of being so far back that, with two rounds to go, they were going to have a minimum impact on the outcome. In fact, Avena is the last of the leaders to meet one of these four, handily rolling up Arie in the fourth round. Quite an unusual turn for the event!

Round 5
Best game of the round was John Remillard's win versus Danilo Avena. It's easy to stumble in that last round, but John played in the same steady style he had used throughout the event, solid early moves and a persistent search for reasonable tactical chances. There was a moment (move 23) when Danilo might have gotten the last minor pieces off the board, leaving Black with a backward pawn to be defended by the heavies. But there weren't a lot of lines for the heavies to work with and White may have thought the situation was drawish without the Bs--and, being half a point back, he needed to play for a win. His judgment seemed confirmed a few moves later when he'd won a pawn, but often a pawn isn't much of a guarantee when the heavies are still on the board; and Black continued with his search for tactical pressure and created threats that finally decided the contest.
Posted by Chess Manitoba at 7:37 PM

I ran a club blog for a year, last year (West Orange Chess Club) when I was back east.

This blog is a very good blog. It takes commitment and tenacity. Good job.

I ran a club blog for a year, last year (West Orange Chess Club) when I was back east.

This blog is a very good blog. It takes commitment and tenacity. Good job. 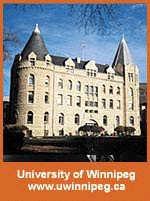